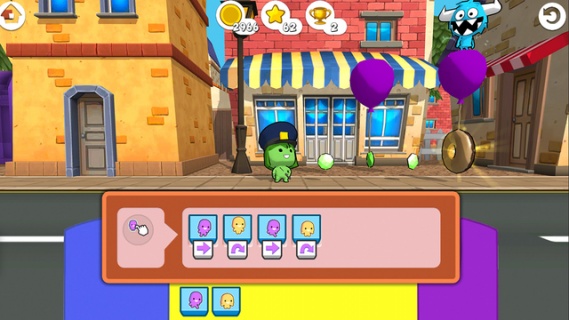 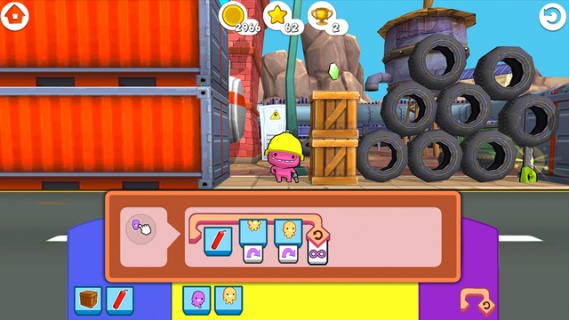 Welcome to The Foos, the #1 learn to code app for ages 5+. Get your kids excited about the ABC’s of computer science with our award-winning game.

We’ve teamed up with Princeton and Harvey Mudd University professors to turn programming into play. Kids learn to code via a series of exciting adventures. Our word-free interface allows anyone, anywhere to play. They’ll track down a sneaky donut thief, rescue puppies lost in space and serve up gourmet meals while mastering core computer science concepts.

The Foos: Over 40 puzzle levels and 3 unique creative play areas for storytelling and animation.

The Foos is an introduction for those who have no experience programming and is all-ages friendly! That means anyone from 5 to 105 can play, have fun and learn real programming logic.

“The Foos is easy to learn, full of playful characters and it’s easy to experiment.” -Children’s Technology Review

“Most appealing to me as a parent was seeing how my children enjoyed working together on the puzzles. Even my teenager was completely engaged!” -Parent’s Choice Awards

The Foos was originally created for The ‘Hour of Code’, a nationwide initiative by Computer Science Education Week [csedweek.org] and Code.org [code.org] to introduce millions of students to one hour of computer science and computer programming.

Parents and teachers are using The Foos first when introducing their kids and students to programming and computer science. Parents can follow codeSpark on Facebook for unplugged coding activities.

There are NO in-app purchases in The Foos.

Is The Foos curriculum and standards based?

Who are The Foos?

The Foos are funny, happy creatures that inspire kids to create and collaborate through programming. Coding with The Foos requires visual, intuitive and imaginative input that builds critical computational thinking skills for future success.

codeSpark is delivering computer science education to kids in over 150 countries by turning programming into play. The company was founded when our CEO wanted to introduce his daughters to coding and couldn’t find any resources that were girl-friendly ways to learn the ABC’s of computer science.

The Foos is a kid’s coding app originally produced for The Hour of Code. codeSpark, the company behind The Foos is steadily releasing new content and challenges that expand upon their original puzzles and turn kids as young as five into digital creators, say Joe Shochet and Grant Hosford, the creators and original Mayors of Fooville. They have generously put forth a free, yes that is a free program for both desktop and tablet play (iOS, Android and Amazon Kindle) that teaches coding in a playful way and is appealing to both girls and boys. There is also a lite…

You may have seen my posts on favorite apps for teaching coding to kids (here’s a long list).  Another one to check out is The Foos which is designed for children of all ages.  This fun and colorful app works with both iPhones and iPads.  It asks students to plug in different moves or commands for each character and press play to watch them move across the screen. Whether you’re gearing up for The Hour of Code or are introducing these types of apps into your…

Engaging and visually appealing iPad app for children that teaches the basics of programming.