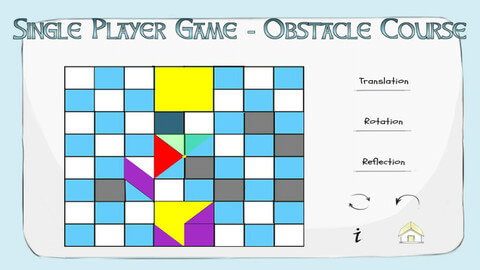 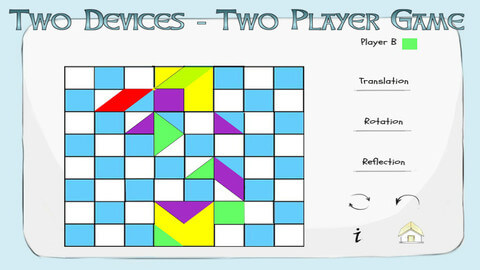 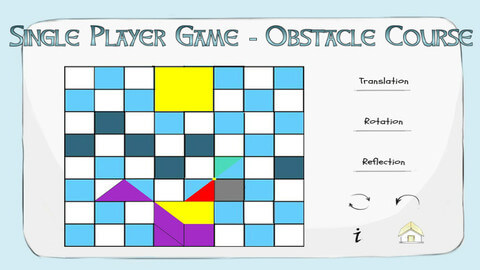 Tangram Chess is an excellent game for kids. It teaches them strategic thinking, logic and it’s fun, too! Play with your iOS device or download a printable version.

The Game Of Tangram Chess

Every game of Tangram Chess has its own story. Some are long-drawn out strategic affairs; others can be quick, but complicated, tactical battles. The winner is the player who can out-think his or her opponent, and make the best plans for attack and defence.

Chess is one of the oldest games in the world. Though no-one knows for sure, it was probably invented in India more than a thousand years ago.

Tangram is probably even older then chess. No one knows exactly when the tangram was created but its design was inspired by a table used in the Tang Dynasty in China.

By combining both these two ancient games “Tangram Chess” becomes one of the most interesting and challenging games that you will enjoy for hours at a time.

AIM OF THE GAME: Students will move their pieces across the gameboard and reassemble their tangram on the other side using translations (slides), rotations (turns) and reflections (flips). The first player to reconstruct his or her 5 pieces in the home square on the far side of the game board is the winner.

The armies: There is a Purple army and a Green army. Both armies have the same pieces. You’ll notice that the tangram for this challenging game is a more simplified tangram composed of only five shapes: a parallelogram, a square, two different right triangles, and an isosceles triangle

HOW THE PIECES MOVE:

HOW TO PLAY TANGRAM CHESS

The aim of the game is to move your pieces across the gameboard and reassemble your tangram in the opposing teams square “home base” on the other side using translations (slides), rotations (turns) and reflections (flips).

Your opponent needs to defend their square – either by moving their pieces in blocking the attack with another piece.

SINGLE PLAYER GAME (Obstacle Course): You will need to navigate around obstacles and try and reassemble your pieces on the opposite square.

ONE DEVICE – TWO PLAYER GAME: You will have to share a device and take turns, the first one to reassemble their pieces in their opponents square wins.

TWO DEVICES – TWO PLAYER GAME: Using Bluetooth you can play this game on two devices, you still have to take turns but you can sit on opposite sides of the room while playing.