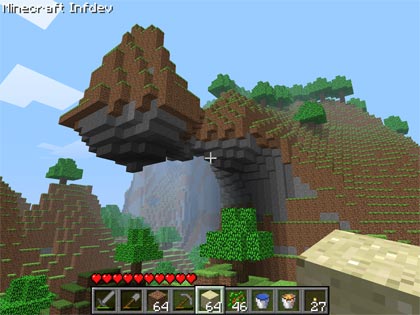 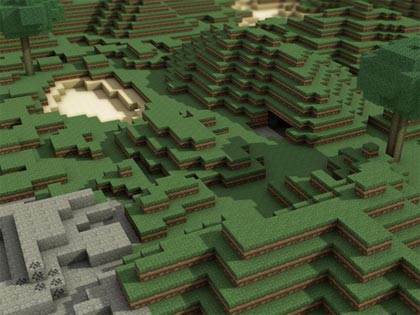 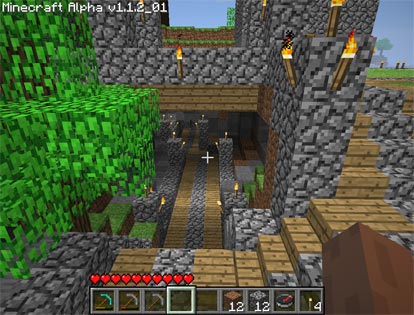 Minecraft is a game about placing blocks to build anything you can imagine. At night monsters come out, make sure to build a shelter before that happens.

Minecraft is focused on creativity and building, allowing players to build constructions out of textured cubes in a 3D world. Gameplay in its commercial release has two principal modes: Survival, which requires players to acquire resources themselves and maintain their health and hunger; and Creative, where the player has an unlimited supply of resources, the ability to fly, and no concept of health or hunger. A third gameplay mode, named Hardcore, is essentially the same as Survival, but the difficulty is locked on the hardest setting and respawning is disabled, forcing the player to delete his or her world upon death. An outdated Classic version is also available for free, although it is no longer being developed. Creative Minecraft resembles Classic, but with many more features.

A player in Minecraft has a lot of freedom to choose how to play the game, with the primary goals being surviving attacks by monsters (known in-game as “hostile mobs”) and building shelter. The core gameplay revolves around construction. The game world is essentially made of cubes arranged in a fixed grid pattern which represent different materials, such as dirt, stone, various ores, water, and tree trunks. While the players can move freely across the world, objects and items can only be placed at fixed locations relative to the grid. The player can gather these material blocks and place them elsewhere, thus potentially creating various constructions.

Minecraft has three currently available gameplay modes: Survival, Hardcore and Creative. Classic is the earliest free version and initially featured only the Creative game mode with only building (block placement and removal) aspects of the game and unlimited block supply. The game was then split into single-player survival mode (referred to as “Survival Mode Test”), which contained monsters and a much greater variety of blocks and items, as well as requiring players to mine their own blocks.

The game starts by placing the player on the surface of a huge procedurally generated game world. The player can walk across the terrain consisting of plains, mountains, caves, and various water bodies. The world is also divided into biomes ranging from deserts to snowfields. The in-game time system follows a day and night cycle. Throughout the course of the game the player encounters various non-human creatures, referred to as mobs. During the daytime, non-hostile animals spawn, which can be hunted for food and crafting materials. Hostile monsters, such as large spiders, skeletons, zombies and the dangerous exploding Creeper will spawn in unlit areas, such as in caves or during the night.

I use this in many different ways to teach math. It can be used to teach straight-line geometric principles, place value, carrying and regrouping. The kids love it, even when we aren’t using it as a manipulative program. I personally love to play on the Survival game mode while it is on the Easy setting.

Hardcore is actually not a game mode but a play difficulty setting. The three game modes are Survival, Creative and Adventure. The game difficulty settings are Peaceful (no monsters), Easy (monsters are few and easy to avoid or destroy), Normal (more monsters which are harder to kill), and Hardcore (all cheats are deactivated and you get one life to live). The kids like Creative – Peaceful and I play on Survival – Easy.

In addition to math, it can be used to teach about supply and demand, surplus, deficit, survival skills, and a multitude of other skills. It is, in my opinion, easily customized.

I would definitely recommend it.

I got the pocket edition of Minecraft for my son two months ago. He is 7. I would not consider myself a gamer, and am a bit concerned about whetting my son’s appetite for gaming too early. However, I got a great recommendation for Minecraft from a trusted source, so I took a risk. I am glad I did. My son loves it. I am satisfied that he is constructing, thinking, strategizing, and now he is even consulting the game wiki to figure out how to unlock more game capabilities. Awesome.