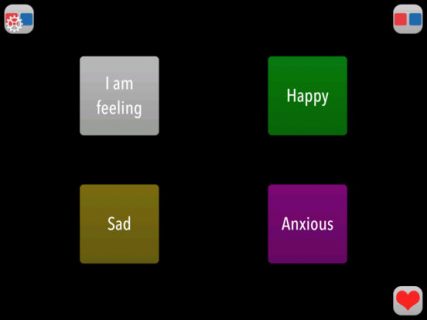 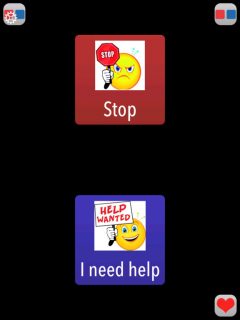 Designed in co-operation with a Speech Pathologist, parents and carers describing what they need, Make a Choice is a simple to use, and yet flexible tool for people who need to communicate a choice.

Make a Choice can be used on its own, however it is also great as an adjunct to your other favorite AAC tools. People with motor problems will find that the button sizes make it easier, providing direct access via fingers or fist, etc.

Make a Choice is great for people working with various forms of Dyspraxia, (also known as Motor Learning Difficulties, Perceptuo-Motor Dysfunction, and Developmental Coordination Disorder (DCD)). By providing a small number of choices, the communicator is better able to focus, and express themselves clearly.

Make a Choice can also be used for “First and Then” two and four step schedules, or in situations where a client needs to express an opinion (“I Like” / “I don’t like”). In fact, the versatility of Make a Choice allows you to use it in all sorts of situations.

Make a Choice provides the ability to configure Choice Boards of two, or four buttons on the screen with text, an image, or both.

When a button is pressed on the main screen, the text of the button is spoken by your device, or, if your prefer, you can record your own voice and that will be played instead.

Buttons may be further configured to have their own background color, ensuring your ability to create buttons that are easy to see, and respond to.

Images can be easily be imported direct from your devices camera, the Photos app, or from the internet via copy-paste.

Make a Choice has been built with speed and ease of use in mind. If you are in an emergency situation and you need to help someone communicate their choice about something, just create a couple of new buttons, and in less than a minute you can have them on screen.

Do you want to create a new Choice Board with a different combination of buttons that you’ve already created? That’s easy! Every button you create is there for you to pick and re-use, any number of times.

For communication ovation partners, this is a great tool to help your cared one express her or his self through choosing one action, over another.

Make a Choice allows you to share your Choice Board configurations with others via iCloud Drive, DropBox, and any other iOS compatible file sharing service. This allows you to backup your data, share it amongst your devices, and with clients and friends.

Make a Choice uses nice large buttons to better facilitate use by people with motor difficulties. Button sizes have been crafted to make them large and well spaced, improving usability further.

Make a Choice works on all iPad and iPhone devices running iOS 9 or later. There are NO in-app purchases, and there are no limits on how many buttons or Choice Boards you can create.

I’m the developer of this app, however the ratings above are based on honest feedback during the testing phase of the app.